Written by Emily Zaehring
Updated over a week ago

Surveys are simply groups of polls. The polls show up together on the attendee’s screen (unless you choose to show polls separately). They are run and closed together.

Start by creating a new survey.

Enter the title you want to be displayed on Attendee's screens. Then select your options. Note: These options cannot be changed after you create the survey. 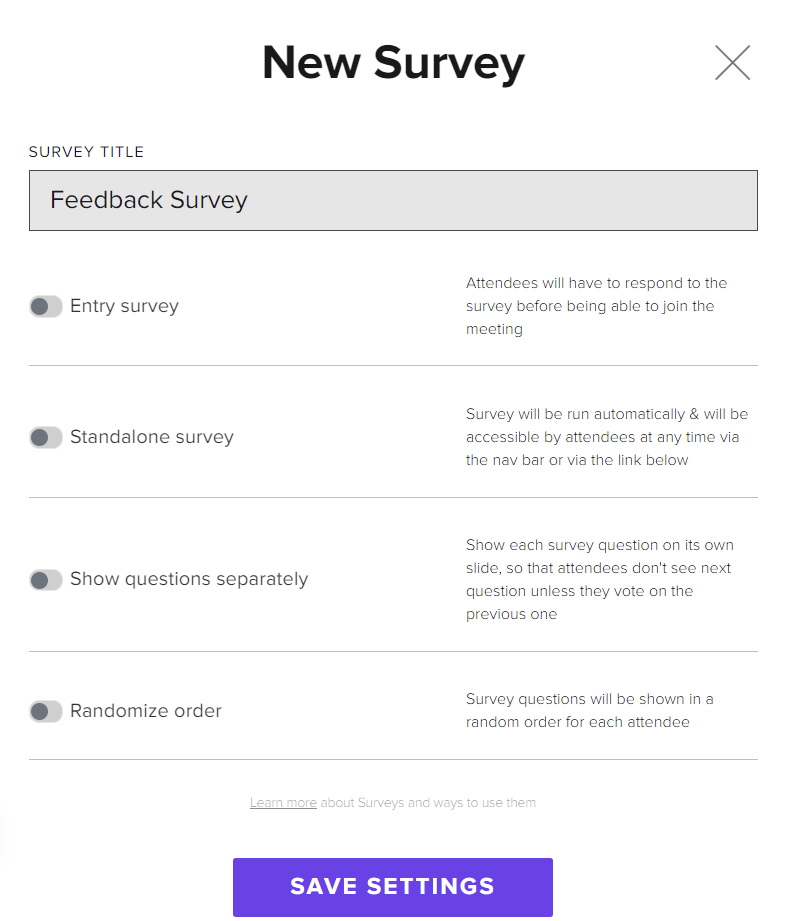 This is the default if you don't pick Entry or Standalone. These surveys can be run at any time and don't require any special conditions. By default, all polls inside them are mandatory.

This survey is shown to all attendees upon entering the meeting. Attendees must complete it before going to any of the platform’s features. You must have one mandatory poll, but the rest can be optional.

In other surveys, attendees see all the polls on the same screen. This option shows each poll separately, making it look like a regular poll. However, when you start a survey that shows questions separately, all the polls will be launched.
Note: Instructional divider text will not work with this option.

Instead of showing the polls in the order you selected, this option randomizes the order. It works great with Show questions separately, especially if you're having a competitive quiz -- people won't be able to guess based on their neighbor's phone. It's also nice if you want to avoid any prejudice that comes from seeing some questions before others.

Next, you need to add some polls to your survey. To do this, expand the Survey by clicking on the arrow to the left of the survey name. (It's highlighted in green below).

Click Add New Poll to add a new poll. This is just like clicking the "Create New Poll" button, with a couple of added options. 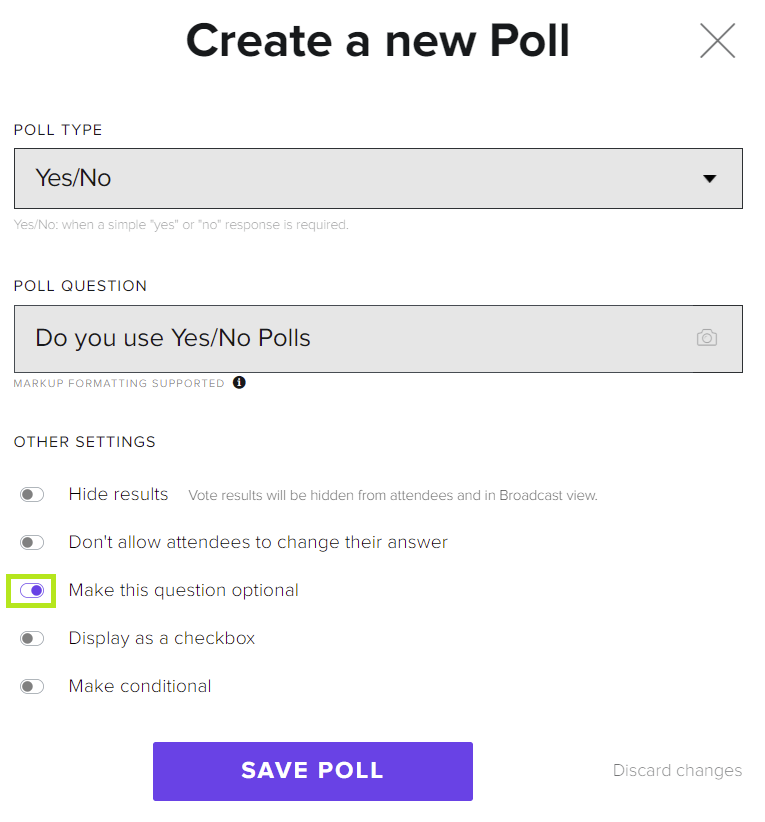 By default, polls are mandatory. If you want to ask your attendees a question they aren't required to answer, do it in a survey. Enable the slider for "Make this question optional". 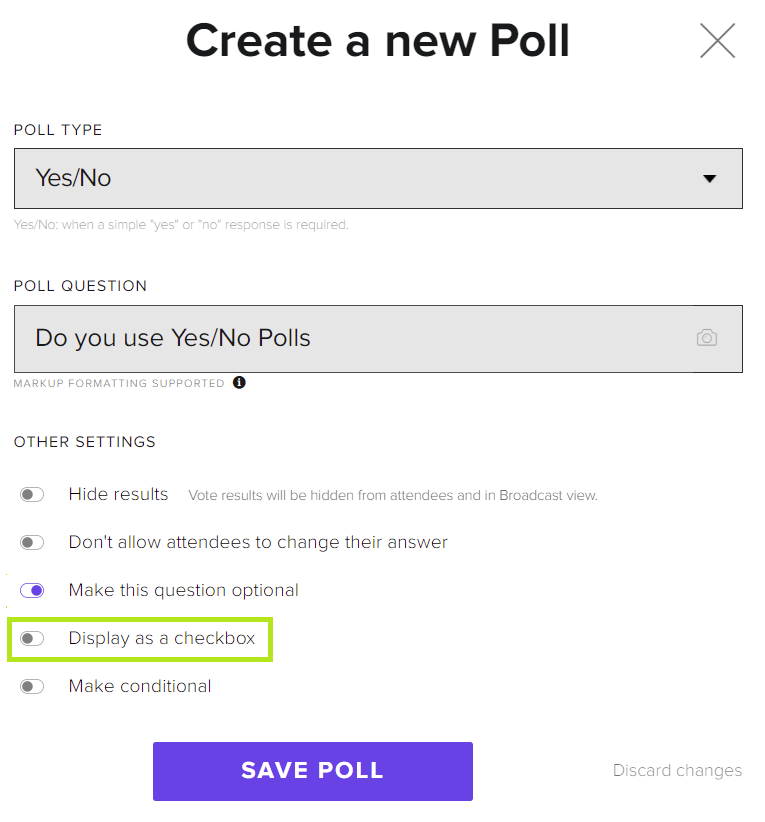 For Yes/No polls, there is a special option in the survey. "Display as a checkbox" replaces the Yes and No buttons with a simple checkbox. When an attendee checks the box, MeetingPulse records it as a "Yes".
Note: this setting cannot be used with the optional-poll setting.

Surveys can also have instructional text separate from the polls. Instead of adding a poll to the survey, select Add Divider Text Block and enter the text you want. You can also format this text. 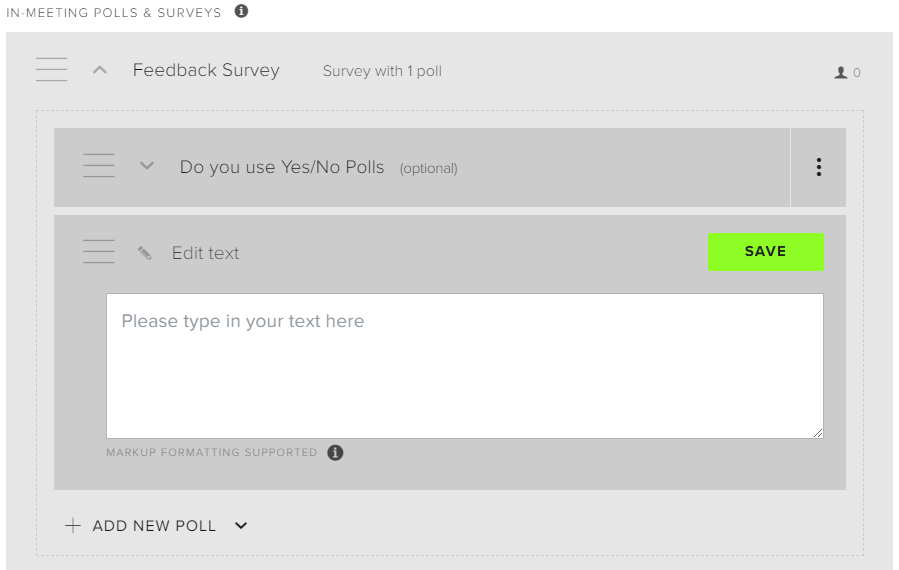 You can drag and drop polls to show up in the order you want. You can also drag polls into and out of the surveys. The instruction text can be edited and dragged around as well.

All polls in a Survey will appear on the same screen, which sometimes means attendees must scroll down. However, you can make any of the polls optional. 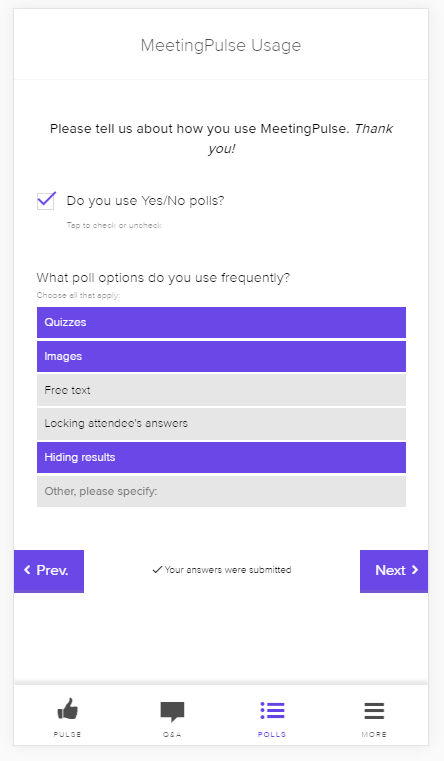 Standalone surveys are held under the Forms slide, instead of the Polls slide. You see it next to Polls below: 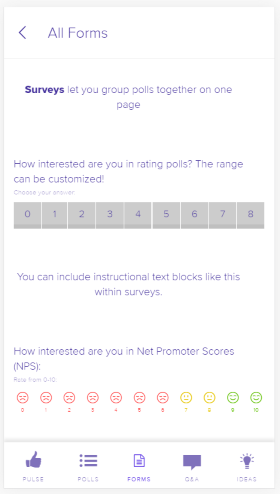 Standalone surveys have their own link. You can send that link out to people so they can go directly to it. Once you've created the survey, open the settings again...

And there you'll see the link at the bottom: 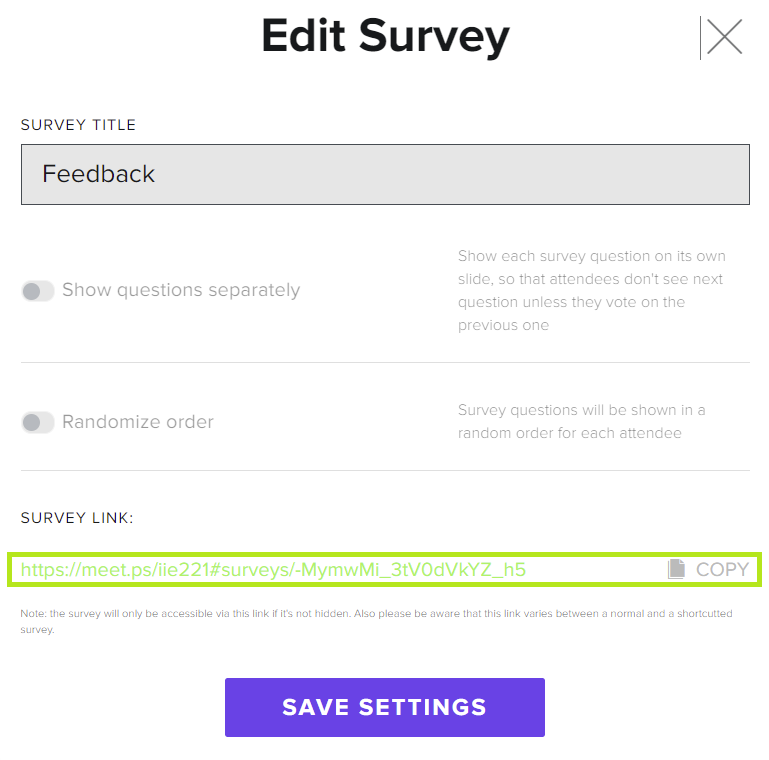 Note: This link changes if you make a shortcut to the survey, so make sure you get the most recent link.

It's possible to add a shortcut to the navbar for each standalone survey. Select "Add Shortcut" from the right-side menu.

Now attendees can access the survey directly from the bottom bar. It's a good idea to keep your survey titles short if you're adding a shortcut. 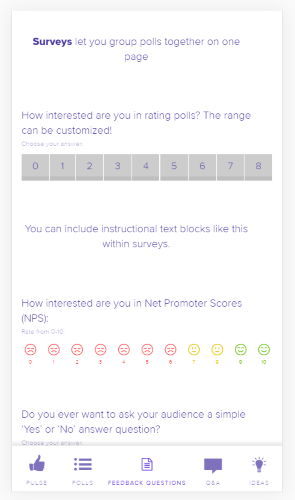 "Feedback questions" takes up too much space, so switching it to "Feedback" is a good alternative. Remember, when you add the shortcut to the nav bar, the link to the form changes.

Where are the exit surveys?

We recommend using standalone surveys as your exit survey. You can show 5 minutes before your meeting ends. This gives people time to complete it during the meeting. You can also use the link to send out the exit survey after the meeting is finished.

You can also use in-meeting surveys for exit surveys, but you can't link to them, and your audience must answer all the other open polls first.

If you want to launch a group of polls together, but you don’t want to have them show up on the same screen you can create a multi-poll survey and enable “Show questions separately”. 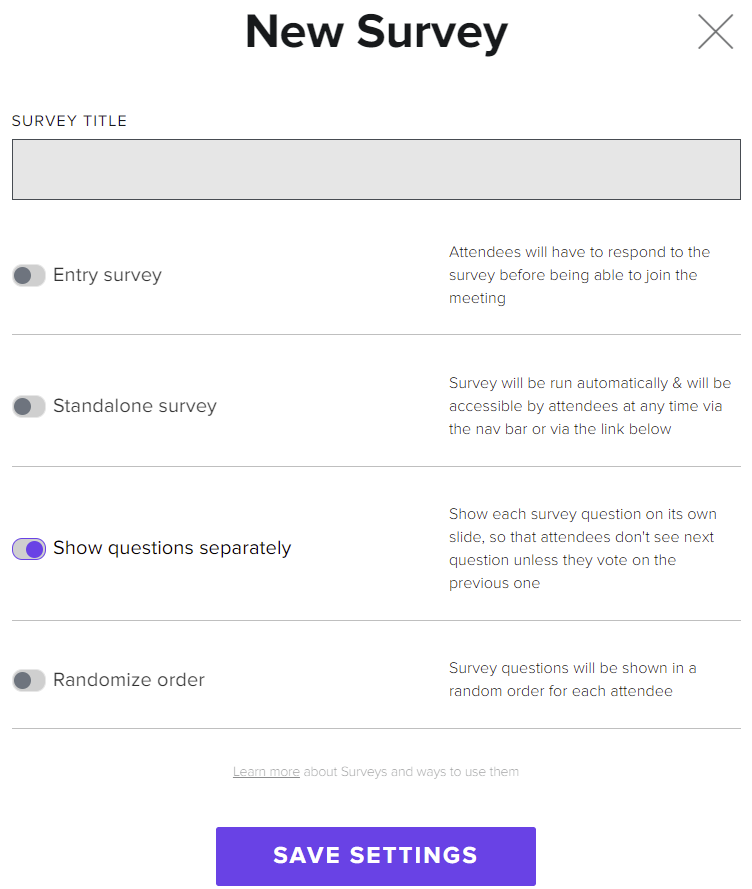 Add all the polls you want to launch together inside that survey. Each attendee will see just the starting poll when you launch the survey. Once they answer that poll, they can click “Next” to move on to the next poll in the survey. 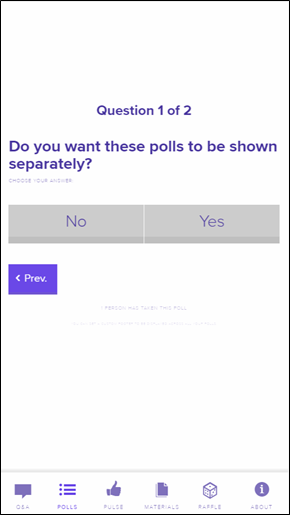 Note: Consecutive Poll Surveys will not show any divider text or the name of the survey.

Duplicate your survey and edit it!

The new duplicate option on Surveys will save you a lot of time setting up your meetings. Once you’ve set up the first survey, you can easily make a copy using the duplicate function.

Tip: This makes it much more worthwhile to take the time to format your poll questions and instructions.

Did this answer your question?